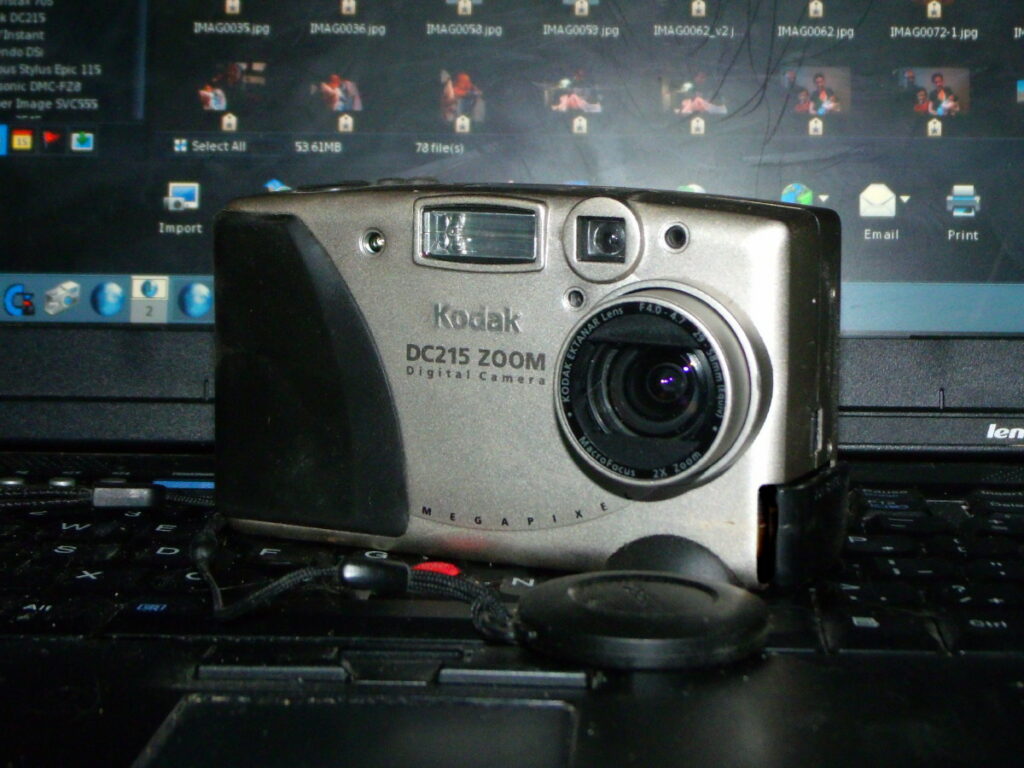 Sometimes low tech devices can be a lot of fun and can push your creativity limits, simply because of their own limited capabilities.

I find this is most apparent when taking photos with my old tech, low-res digital cameras.  I have a few of them, which include my ViviCam 3545, Sharper Image SVC555, Kodak DC-215 and EeePC 701 webcam.

Photography these days isn’t quite the same experience it was before the arrival of the modern-day “smart phone”, with their ultra hi-res cameras and photo processing AIs.  It doesn’t take a lot of skill to take photographs anymore.  But there used to be a time when snapping photos did take a bit of thought and planning, at least to get something interesting to look at and enjoy.

This is one of the  reasons I still enjoy going out with my old tech, low resolution cameras (film cameras included) to see if I can stretch my photo taking abilities and capture something interesting.  I’m not saying I’m any sort of photo expert; far from it.  I just enjoy the process of taking photographs and looking at the images I do happen to record.  I particularly like the effects you can get (planned or unplanned) with these early digital cameras.  Many of the photos resemble oil paintings to me, due to the limited number of pixels the cameras can record. 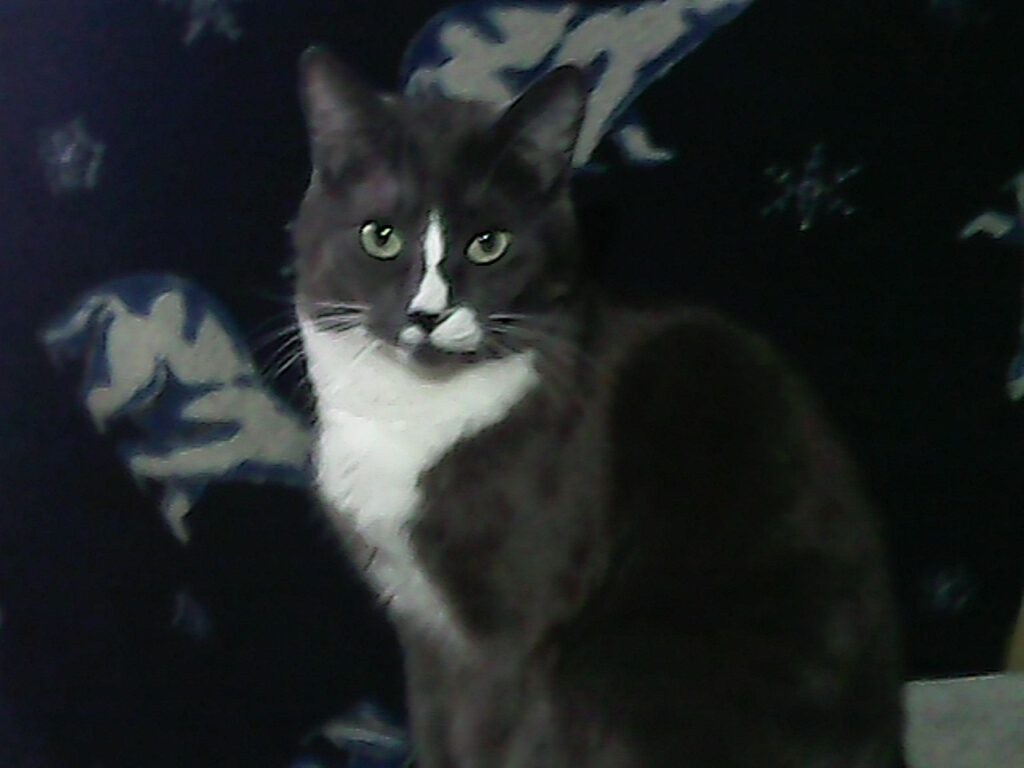 What I’ve learned about photographing with these sort of cameras is that, you want plenty of light, but not a lot of contrast.  High contrast tends to confuse the auto-exposure sensor and you’re left with over-exposed pictures that lose a lot of their detail.  With so few pixels at your disposal, you want to make good use of as many as you can. 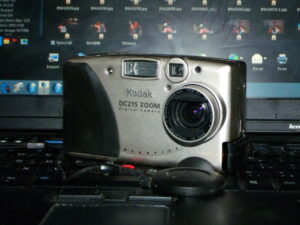 This was my very first digital camera. I purchased this in 2001 and used it quite a bit. It has a full 1 megapixel resolution, 2x optical zoom, and records to compact flash cards. The camera still works, however the battery tray has a broken latch (you can see it protruding out, to the right of the lens in the photo). This was a common problem with the DC-215.

Early digital cameras, like the DC-215, came with RCA cables, which allowed you to plug the camera into the video ports of your television. This allowed you to view your photos, right from the camera, without the need of a computer or other media device.

Apart from the plastic battery tray, this camera is a pretty sturdy little fellow, with its metal body and thick rubber hand grip. It feels very solid, in the hand. 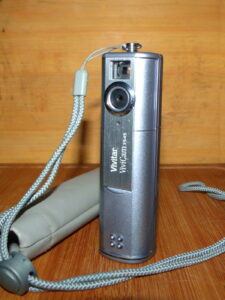 This was my first mini camera, which I bought back in 2005, and it was a pretty unique camera, back in the day. Remember that this was before smart phones and tablets, and laptops didn’t have web cameras built in to them yet.

It was considered as a “wearable” camera, that is, it was compact enough to wear around your neck, allowing you to take it with you where ever you went. It is a 1.3 mega pixel camera, with 16MB of storage built in (no high capacity SD or MiniSD cards at this time), has an optical view finder, and can take both JPEG images and AVI video footage, and is powered by two AAA batteries.

It could also be used as a webcam for your computer, via the USB connector, although it doesn’t have it’s own audio, so you’d have to have an external microphone already connected to your PC.

Although the image quality can’t compare to today’s mini cameras (like those in your smart phone), it still does a pretty good job at taking low resolution photos and is quite compact and convenient to use. It certainly does what it was designed to do. 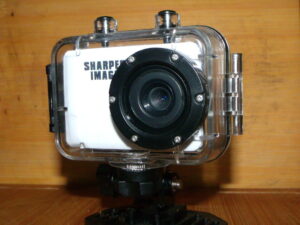 The resolution of the SVC555 only 5 megapixels, but can shoot both still photos and video.  It offers a few in-camera settings to help you with your photo taking, like colour filters, exposure levels, burst and timer settings, and some effects (like black and white, or sepia).  It also came with a water proof housing, not that I have any desire to dive into any bodies of water, as well as helmet mount.

The photos quality of this camera isn’t going to get the better of any modern day cell phone camera, but I enjoy the challenge of taking good photos with something like this. It’s tiny, so it’s really easy to carry around in a shirt pocket.

If you’d like to look through some of the photos I’ve taken with these cameras, feel fee to stop by my photo album, here at 23HQ. 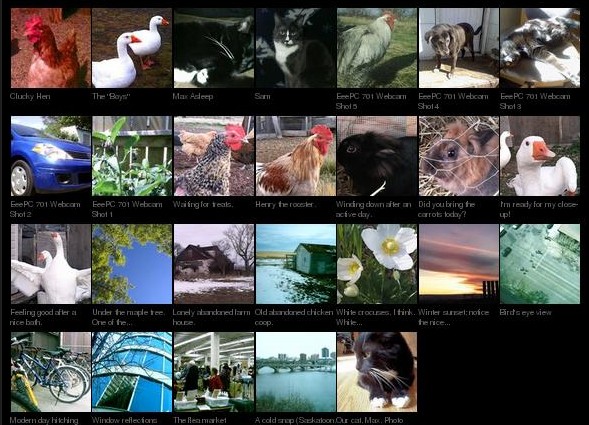