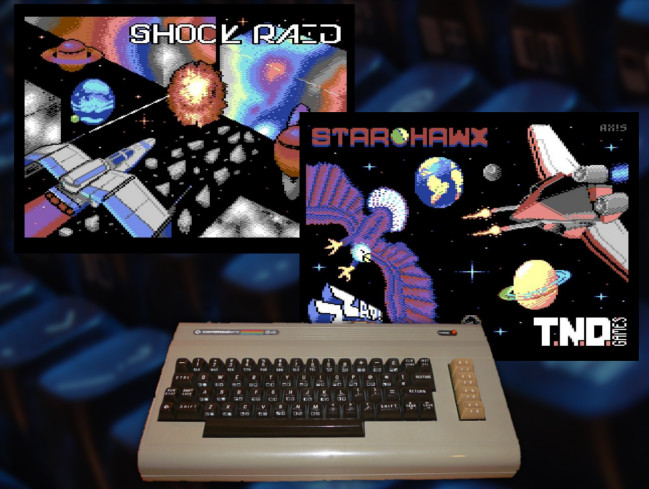 n Shock Raid, you have to guide your ship through the four treacherous levels, trying to avoid colliding with anything on the screen and the waves of enemy ships that are trying to stop you. Rather than having multiple ships, you have one ship with 15 shields. Get shot or collide with an obstacle, and you lose a shield. Lose all your shields and it’s game over.

It’s a standard vertical space shooter, but this time it’s NOT made with S.E.U.C.K., which probably helps it’s playability on NTSC systems.

Star Hawx is a game that pays homage to the classic Galaxian-style arcade shooters. In this version, however, there’s a constant threat of dive bombing hawx that you must either dodge or take out with a well timed shot. As you progress in the levels, the number of dive bombers increase. You also have one shield that you can use (by pressing down on the joystick) that protects you for a brief moment to get yourself out of a sticky situation. Blast away the bonus eggs that appear, from time to time, for extra points or an extra shield.

As with Shock Raid, this game is also NTSC friendly and is a bit more challenging to play.

Both games, I think, are really well done, with bright colours and tight controls that respond nicely. What I’ve also come to expect from TND games is pulse-thumpin’ soundtracks, and these two games do not disappoint (unfortunately for Star Hawx it’s only on the title screen). I do enjoy Richard’s style of SID music. I’ve also noticed that production value of games coming from TND has improved over the past year. Each of the new games I’ve tried now include a professional looking TND introduction segment and a well drawn splash screen, unique to each game. Very posh.

I should also mention that both games include hi-score save features and are compatible with the V-1541. Although, if you load the games via the V-1541, hi-scores will not be saved, as they use Device #8 to do so.

You can get more information about these games, as well as download the disk images, over at TND’s Website.