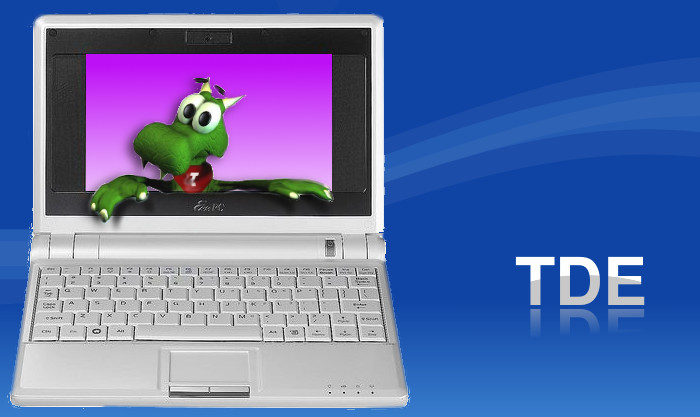 Here’s a process on creating keyboard shortcuts for your Trinity Desktop to quickly and easily turn the tapping gesture on your netbook’s touch-pad on or off “on the fly”.

I’m one of the (probably) few people out there that still prefers to do my computing on my netbook, rather than my full-sized laptop or desktop computers. But, one of the issues I used to struggle with was accidentally letting my hand tap on the netbook’s touch-pad while I was typing something. When I did this, the computer would identify that as a mouse-click. So, as I was in the middle of typing a sentence in a document or on a web page, all of a sudden my cursor would jump to where ever the mouse pointer happened to be “resting”. It was very frustrating.

To do this in the Trinity desktop is a pretty easy process; and here’s how I did it.

In the “tap on” file, you put in the commands:

In the “tap off” file, you put in the commands:

Once they’re created and saved to the hard drive, the permissions need to be changed on them to make them “executable”.  To do this, at the command line type:

Now, all you need to do is assign keyboard shortcuts to both of these files.  There may be an easier way to do this than how I handled it, but I could only think of this method:

First, right-mouse click on the TDE Application Launcher and start the Menu Editor.  Next, choose a place in the menu hierarchy where you’d like to add these two entries and then create New Items for each of the files. 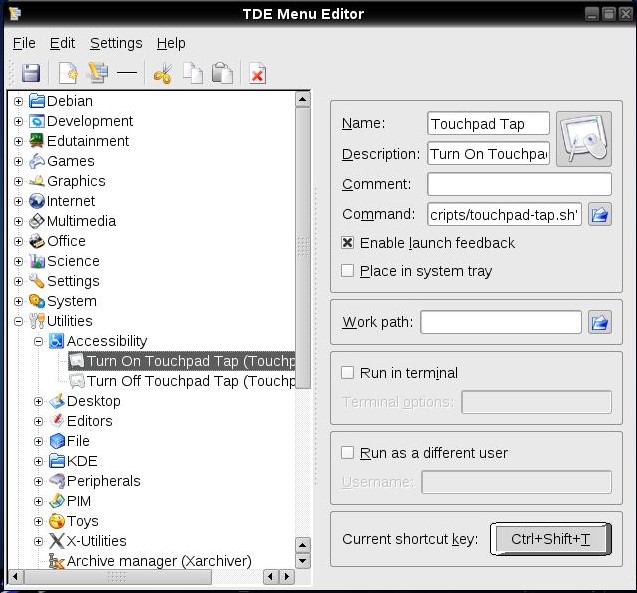 In my example, I put them under Utilities > Accessibility.  Fill in the fields, Name and Description and give the applications an icon, if you wish.  In the Command field, click on the folder icon next to the entry field and navigate to the folder that contains your scripts and click on the script files.

Lastly, go down to the Current Shortcut Key option (at the bottom), click on the button icon and type in the shortcut key combination for each of the files.  In my example, I’ve given the “Tap-Off” file a shortcut of SHIFT-CTRL-N and for the “Tap-On” file, the shortcut SHIFT-CTRL-T.

When you’re done, click the Save button (located near the top left corner) and you should be set.  Now, if you wish to turn off the touch-pad’s touch gesture, use your new keyboard shortcut.  To turn it back on, use your other shortcut command.

That’s all there is to it!  Now, you won’t have to struggle, as I did, with accidentally tapping on your notebook’s/netbook’s touch pad.