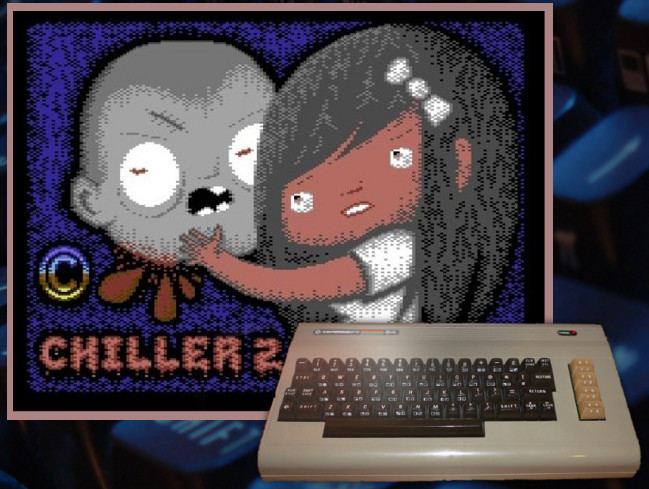 A modern perspective on a classic C64 game.  In Chiller 2: The Return of the Jackal, your goal is to collect the life giving crosses to vanquish the hoard of zombies and ghouls that inhabit each spooky level.

Back in 1984, the trailblazing budget video game publisher, Mastertronic, released the zombie themed game, Chiller. Now, thirty seven years later, Andy Vaisey took it upon himself to take the basis of Chiller and produce a version of it that is actually challenging and entertaining.

Much like the original, in Chiller 2: The Return of the Jackal, your goal is to collect the life giving crosses to vanquish the hoard of zombies and ghouls that inhabit each spooky level. Collect 20 crosses and you move on to the next level. Don’t let these nasties grab you, or you’ll lose life energy. Lose to much, and it’s game over! Also be aware to avoid the poisonous mushrooms that are littered around the landscape.

The gameplay is in the form of a straight forward platformer and you start off by choosing the player you wish to be, the boyfriend or girlfriend. Similar to the original Chiller, each level has it’s own theme and selection of baddies. Of the twenty crosses you need to collect, only one is visible at a time. Each time you collect a cross, the next one appears at a different location on the screen. There’s no time limit, so you have the opportunity to study and choose your route to the next cross. And this is the “secret” to making progress in this game: planning and strategy.

So, how does Chiller 2 hold up when compared to the original? In a nutshell, Andy’s reincarnation is much better. Overall, production value is much higher than the original. The game levels are better designed, better drawn and coloured nicely. Player controls are tighter and more responsive, which simply makes the game more fun to play. In the original Chiller, you can replenish life energy by collecting certain crosses and mushrooms. In Chiller 2, there is nothing to collect to replenish your life energy, so you need to be careful not to touch anything that drains it. However, at the beginning of each new level, you start off with a full life meter.

Chiller 2 is one of those games where your movements have to be precise and correctly timed, in order to land your jumps onto the platforms or to avoid losing life energy. But, on the plus side, you don’t have to concern yourself with that pesky inertia that some games employ on your player’s movements (I really detest the “inertia factor” in platform games).

There’s also a margin for overlap between your characters and the life sucking baddies. You can actually come into contact with them, ever so slightly, without having them cause damage. At first, this kind of threw me off, as I’m used to many games for the Commodore 64 adhering to the “pixel perfect” rules of engagement. That being, if you’re one off, you are punished. But, after playing Chiller 2 a few times, I was able to learn the boundaries of my player, the baddies, and the platforms I had to navigate.

So, although there are some challenges to overcome when it comes to correctly jumping between and landing on the platforms, the game is balanced with a margin of error pertaining to the damage-causing elements in the game. Which, for me, makes the game challenging but not frustrating. I can’t say the same for the original Chiller.

The only place where Chiller 2 falls a little short for me is in the sound department. Although the in-game tune of the original Chiller isn’t (what I would call) a masterpiece, it’s still a nice enough little tune that is long enough not to be irritating. The music in Chiller 2 is okay, but it’s short in duration and, therefore, repeats far too often during game-play. This quickly becomes irritating and I have to turn down the volume. It would have been nice to have an option at the title screen to turn off the music. (Additional note: Chiller 2 sounds best when using the 8580 SID)

One of the features that Chiller 2 has that wasn’t in the original is the ability to start a new game on the last level reached in the previous game. Although your score starts at zero, it’s still nice to not have to play the earlier levels if you’d like a better chance of seeing what’s ahead. To do this, rather than pressing the fire button to begin, you press F7.

Apart from improving upon the music, my only other suggestion for improvement would be to employ some sort of scoring bonus. For example: give the player bonus points for how much energy remains in your life bar at the end of the level. I think something like this would add to the replay-ability factor of the game, for those players looking to improve their scoring potential. It would also make for a nice “game competition” element for those who partake in such activities in the Commodore forum scene.

Bottom line, Chiller 2 is a vast improvement over the original and Andy has done an excellent job at reviving and improving upon a Commodore classic. It’s simple but challenging, and fun to play.

You can find Chiller 2 on CSDB.DK or purchase a physical copy of the game over at PHOENIX WARE. 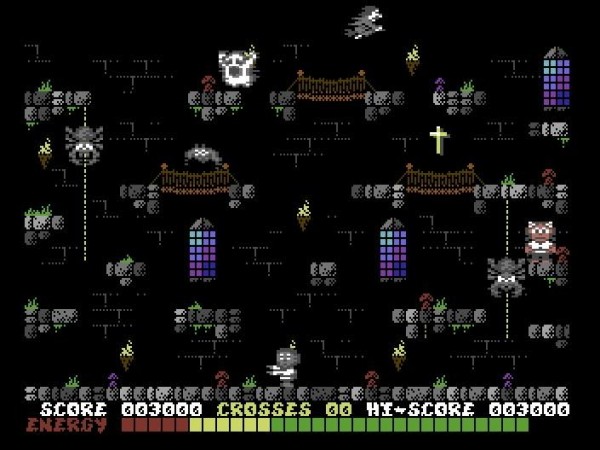 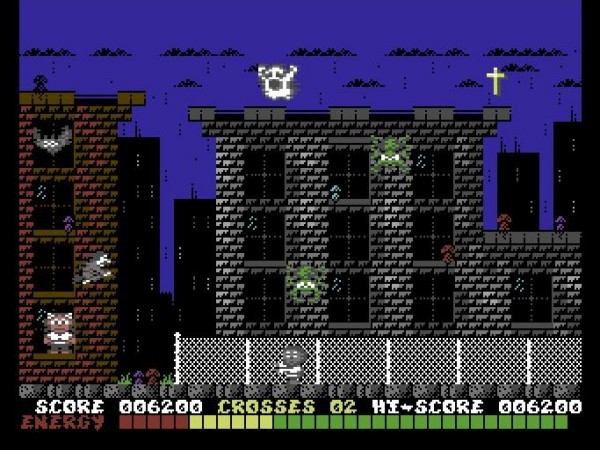