It’s been over a year since I decided to install Exe GNU/Linux onto my aging T61 Lenovo laptop. So, how has been Exe performing for me in all that time? Well, I’m still using and enjoying it, so it’s been a going great!

Early this summer, I’ve migrated over from my T61 to one of our Acer Aspire One netbooks, taking Exe along with me. I’m very pleased with how it performs on the Aspire One, even better than Q4OS has done. The TDE desktop environment is well suited to the netbook and is very responsive, even with the somewhat limited resources available.

This year I’ve also test driven the Centaurus release of Q4OS and Zorin 15.3 Lite and although they’ve performed quite well, they didn’t seem to run as fast nor have the flexibility that I have with Exe. Even though Exe took just little bit more effort to get everything configured “out of the box” than the other operating systems, I found it to be better in the end and well worth the time.

It’s obvious that Zorin’s default desktop (that being XFCE) looks and feels like a more modern environment to work in, I found that even though it may be prettier, it just got in my way too often. I was a little to restrictive for my taste. It also wasn’t playing very well with the touch-pad on my netbook. Trying to scroll without a mouse and mouse-wheel was frustrating; the response and sensitivity was terrible. Trinity, on the other hand, is much more responsive and gives me more control over my input devices.

While Q4OS does use Trinity for a default desktop, just like Exe, they’ve done some customization to it that put an extra layer of complexity on some tasks that should be simple to do. It may be prettier and have a more modern look and feel, I just don’t appreciate the extra work it takes me to get it to do what I want it to do. As an example, there are some more advanced admin-type functions that are hidden in the Q4OS version of Trinity that require some command line work to gain access. Also, the TDE menu system is customized, so applications are not where you’d expect to find them and adding your own entries is a bit of a chore.

Exe, on the other hand, delivers a pretty much “stock” Trinity desktop. The TDE menu system is simpler, but there’s less navigating you have to do to get to the applications you want to use. It’s also easier to customize the menu to your liking, which is something I much prefer. Because I’ve been using theKDE 3.x desktop environment for so long, it’s all pretty much second nature to me to get it to do what I want it to, without the extra layer of “distro interference” (as I call it).

I can also say that Exe is the fastest when it comes to booting up and shutting down, when compared to Zorin and Q4OS. I’m up and running on my Acer Aspire One in less than 50 seconds and shutting down takes less than half that time.

This summer, I also did another update to my Exe install, bringing the Trinity desktop up to version 14.10. As with the last update I did in the spring, all went smoothly. It was quick and the system has been pretty much rock solid for me. I remember having one application suffer a Segmentation Fault crash a while ago, but I can’t recall what I was trying to do.

Along with some improvements in performance, visual touch-ups and bug fixes, the update to 14.10 also brought over a few desktop utilities from the old KDE 3.5 repositories; including KlamAV and Kompose. I was happy to see Kompose finally added to the TDE repository, as I enjoyed using it back in the KDE 3.x days. 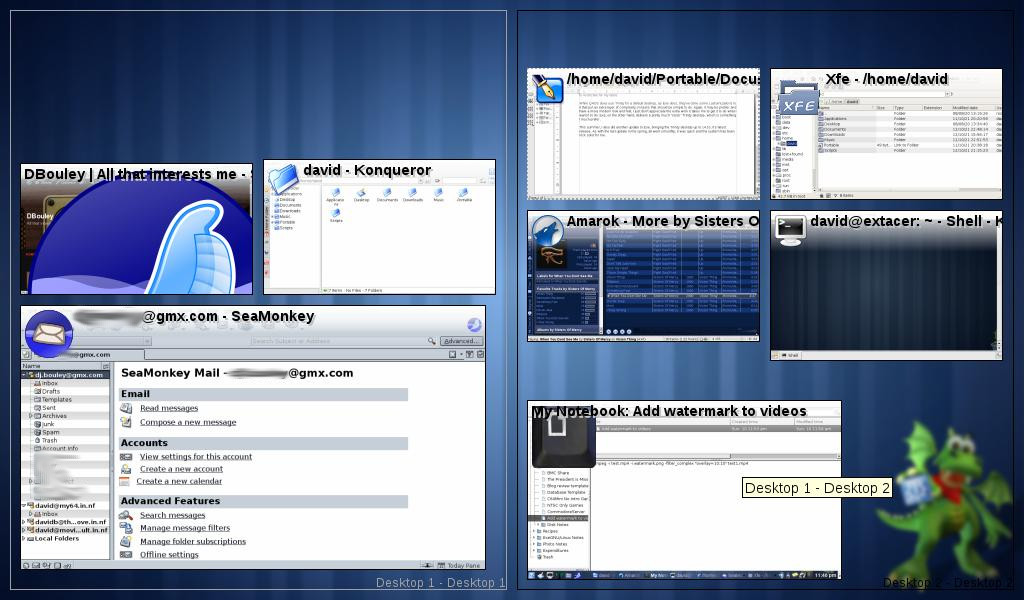 A couple of other desktop utilities that I’ve started using more regularly this year were Yakuake and KNotes. Yakuake is a handy little terminal emulator, which drops down from the top border when you press F12 (or any other hot-key you assign to it). It’s much faster and more convenient than having to mouse over and open up a terminal window – like Konsole – when all you want to do is execute a quick command on the command line. 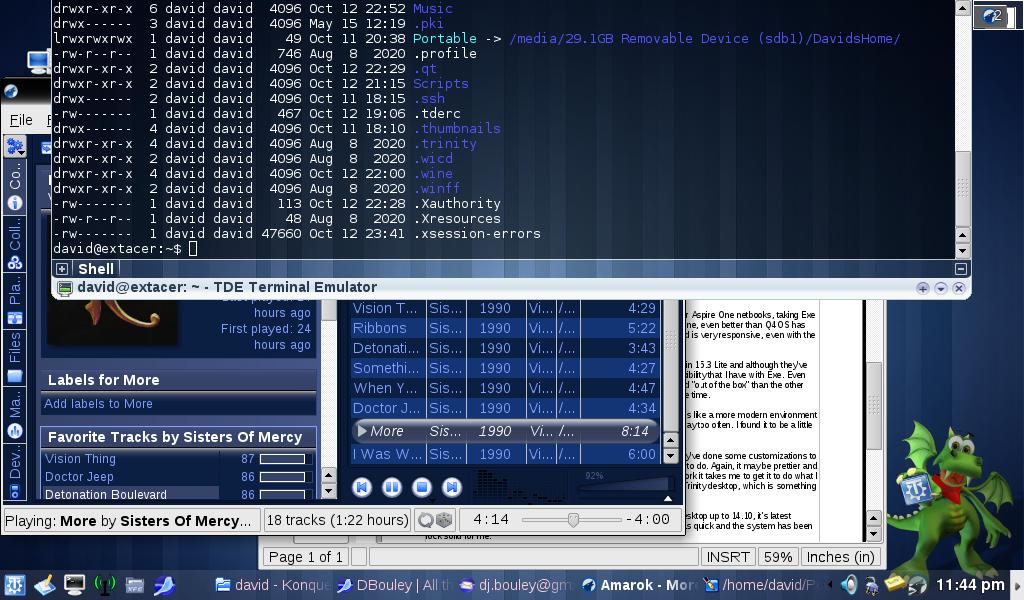 As for the office suite, KOffice, if you recall in one of my previous Exe review postings, I mentioned how well Exe’s implementation of the suite seemed to perform. I also made the comment that, if it continues to perform as well as it did in the beginning, I may not have to install LibreOffice. Well, I still haven’t installed LibreOffice or any other alternate office suite, so it’s been doing surprisingly well. I guess it just goes to show how good something can perform when you keep the tinkering and tweaking of the desktop environment down to a minimum. When you get too complicated, stability always tends to suffer for it.

Now, I’m not saying that the KOffice suite has as much functionality as LibreOffice does; It’s much more simpler in what it offers. But, I’m not working in an office anymore, so my needs are simpler these days. So, KOffice does just enough for what I need it to do and I get the added benefit of not having to deal with an overly complicated interface for simple word processing and spreadsheet tasks.

After all is said and done, I have to say that Exe GNU/Linux has been a pleasing experience for me. I’m not saying that Zorin or Q4OS aren’t good operating systems; they are and would certainly be good choices for people not quite as accustomed to using Linux. But, I much prefer the simplicity and improved performance of Exe, and I’m comfortable enough to do the little tweaks (as mentioned in my previous review posting on Exe) that needed to be done to get it working just right on my older hardware. I’ll continue to stick with it for the foreseeable future.