You could say that I’m a “gadget guy.”  I really enjoy electronic gadgets, at least electronic gadgets before the days of the all-in-one “smart” devices.  Today’s consumer devices may be the most technically advanced and functionally diverse gadgetry ever to exist, but let’s face it: they’re boring.

I can remember my enjoyment for fiddling and tinkering with electronic devices beginning with the Parker Brothers Merlin handheld electronic game.  I’ll never forget the countless hours of fun it gave me, with the flashing LEDs, futuristic electronic sounds, and the selection of games you could play on it.  That’s where it all started for me.

During the eighties, there was an explosion of handheld devices on the market that did so many wonderful things, from the digital wrist watches and calculators to the more complex mini “Watchman” television units.  There were devices for just about anything you could think of, all arrayed with so many different buttons, knobs, dials, switches and LCD readouts that kept a person like me occupied for hours… or even days.

As the years went on, these electronic gizmos became more sophisticated and elaborate in their designs and functions.  Soon, we had even more entertaining devices to choose from, like the Tandy Pocket-PC.  Now, that was a device that was rarely out of my reach for most of the late 80 and early 90s.  I don’t use very much these days, but I still have it and cherish it. 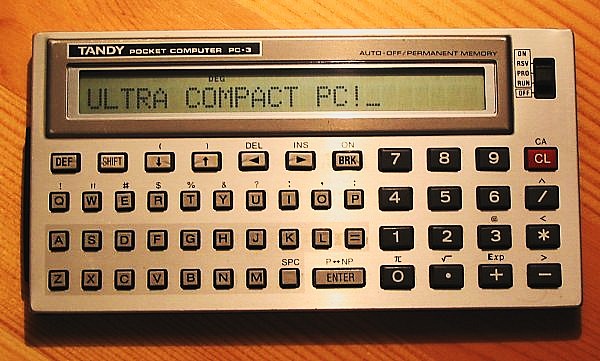 My Pocket PC gave way to the new pocket day timers/organizers that started to spring up on the market, in the early 90s.   All of those buttons and built-in functions really catered to the “gadget guy” in me.  The ultimate were the Franklin Bookman devices, that could contain the contents of an entire library of encyclopedias in one little card.  Later, they also developed ebook cards that did some of the PDA and organizer functions, which really made them interesting devices to have.

Then, in the early 2000s, Franklin really went “whole hog” on digital ebook / PDA development when they launched a very diverse line of digital organizers and then the eBookMan.  All of those buttons!  All of that functionality and portability!  It was such a fun time for portable electronic devices.

But, here’s the thing: even though these devices did a lot of things, they didn’t do everything.  They still had the characteristics of being unique devices that did certain things.  We, as consumers, had a choice as to what kind of devices we wanted to own and use.  Did you want a PDA that used a keyboard input, or one that used a stylus?  Did you want one that could read downloaded ebooks, or did you prefer cartridge based technology?  Do you need it to have wireless connectivity to your PC, or is a serial or USB cable good enough?  If you want to expand it’s storage capacity, do you want to use Compact Flash cards (like your digital camera), or do you want the more compact MMC memory cards?

But, today, although you may think you still have a choice in the products you buy, I hate to be the one to tell you this…. you don’t.  It may appear as though your local cell phone outlet has all sorts of different smart phones for you to choose from, but look closer.  They’re all basically the same thing.  They do everything, and by doing everything there’s nothing really special about any of them.  Unlike the good ol’ days, one device does everything for you, so there’s really nothing that makes it special.  And for a gadget guy like me, this is utterly boring.

I mean, just look at this photo and try to admire how unique and special these little works of electronic wizardry are from one another.

Although they all do very similar things, every one of them is unique.  They were made to appeal to different kinds of people, with different needs and different interests.  They don’t do everything, just like not every person needs to the same things as everyone else in the world.

Now, look at this photo of our cell phone.  It’s as boring and indiscriminate as a thing can get.

Sure, it does everything, but what if I don’t want to do everything with it?  Unfortunately, it’s because of devices and mentalities like this that our choices as consumers are slowly being taken away.

This is the reason why I refuse to use our cell phone for anything else but making phone calls and as a hot spot for Internet access.  If I want to take a photo, I’ll use my camera, which has a view finder that actually let’s me properly frame a photo in bright sunlight.  And if I want to read an ebook, I’ll use my eBookMan that also lets me clearly read from it’s screen in bright sunlight.

I’m a gadget guy who’s unfortunately found himself in a world that’s doing away with anything “gadget-y”.

Here’s a link to a gallery of some of my other retro tech that I enjoy…  23HQ Tech Album.