I really, really tried…  I tried several times… I tried so very hard to stick with Vivaldi, but I must go back to SeaMonkey for my everyday web browsing.  It’s the web browser that just can’t be beat for performance, stability, and compatibility; at least for me and my computing needs.

Now, I’m not saying that Vivaldi isn’t good – it is.  The dev. team have done a fantastic job molding their browser into what it is.  The innovations they’ve made are truly ground-breaking. It will remain as my second choice for web browsing.  But, as it is, it’s just too “heavy” of an application for my aging T61 Lenovo laptop.  I keep upgrading Vivaldi to the latest release, but no matter what I do, it just gets too slow on my system after several hours (over a few days) of web browsing.  It uses up more resources as the days go on until it reaches a point where it sends the system’s hard drive into access overload, spinning away and slowing everything down to a crawl.  I then have to either attempt to interrupt the activity and forcefully shutdown the browser, or simply power off the laptop and reboot.

I also have performance problems with Vivaldi when I have too many tabs open; that being more than six or seven open at one time.  If I go over that, then suddenly the hard drive access light starts to flickering and then goes into “overdrive” again until I can close a tab or two.  But this isn’t the only issue I’ve had with Vivaldi, it also crashes on me under certain circumstances, usually proceeded by the appearance of the “dead canary” screen.

Last week, for what ever reason, there was a graphic element on the Community news feed that would bring up the dead canary screen.  From what I could deduce, it was the pictured used in the poll posted by Vivaldi regarding tab use.  I could view the Community feed with other browsers (I tried Firefox and SeaMonkey) and it was fine.  But Vivaldi didn’t like it and would crash.  Now that the polling is over and the post is gone, the Community feed shows up just fine.  It doesn’t happen often, but there are certain web sites out there that caused Vivaldi to do this on me.  Imgur.com is the worst culprit for me.

It’s not just Vivaldi that gives my system performance issues like this, but any web browsers based on Chromium perform terribly on my system.  Vivaldi is just the best of the Chromium browsers that I’ve experienced.

SeaMonkey, however, is just the opposite.  It has always been fast and very responsive, as well as stable.  I can’t remember the last time I had it crash on me and I can open dozens of tabs and not have any performance issues.  I know the interface is dated and does not have as many bells and whistles as Vivaldi, but I’d rather be able to access web content than see a bunch of eye candy.

The other thing about SeaMonkey that I really like (and miss when not using it) is the extra components that makes up the SeaMonkey “suite”.  It has a fantastic integrated e-mail application, day-timer/calendar, and address book.  And because they’re so well integrated into the suite, they don’t bog down the system with extra libraries and such, which you would get if you had to run Vivaldi, and a separate e-mail client, and a separate calendar application. 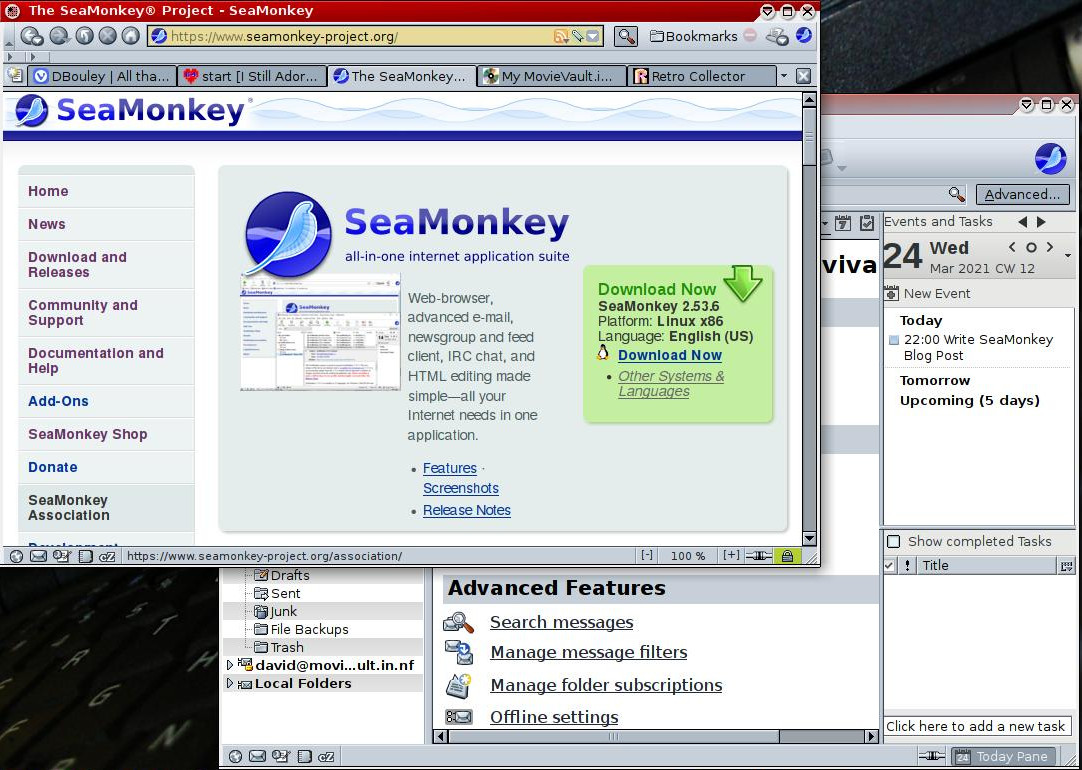 Vivaldi is a really well polished web browser and has come a long way.  But for people like me who don’t have the most modern, super powerful desktop or laptop systems, it may not be the best fit.  I need something functional, stable, and not a system hog.  I’ve tried many other web browsers, but I haven’t found any of them as enjoyable to use as SeaMonkey.  I can use it for weeks without having to shut it down or reboot my laptop without a single problem or hiccup.  I just can’t do that with any other web browser.

So, for now, I’ll just have to put Vivaldi aside for a while.  I’ll download updates every once in a while to see how things progress.  But, today, I’m back to using my reliable SeaMonkey.  I’m not going anywhere in regards to the Vivaldi community, though.  I’ll still be blogging here and reading the Community pages, it will just be with SeaMonkey.