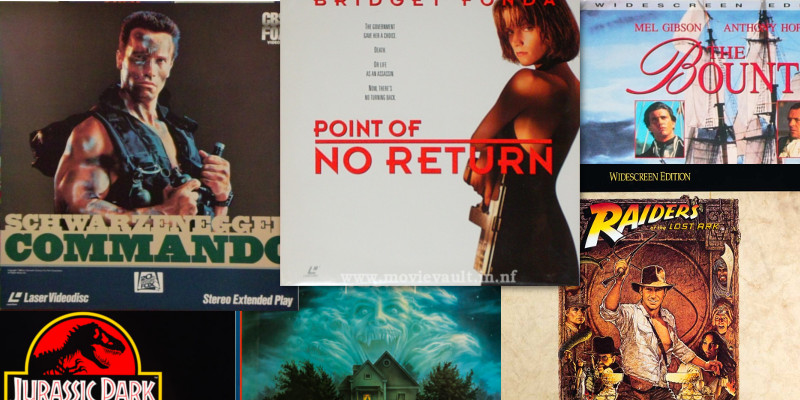 So, after all of these years, why are LaserDiscs still my favorite video format to watch and collect?  One of the reasons I enjoy watching movies on LaserDisc so much is probably because I also grew up listening to and collecting music on vinyl LPs and 45s. There’s just something that resonates with me concerning the whole hands on experience that LaserDisc viewing involves.

Just like listening to music on vinyl, it’s more than just pressing play on a DVD or BluRay player, then sitting back for a couple of hours while your movie plays.  You have to handle a movie on LD with care and attention. You have to get up and flip or change discs every so often.  Just like listening to music on vinyl LPs, watching a movie on LaserDisc is an “experience” that involves it’s own special rituals and traditions. It’s something special and out of the ordinary from today’s modern world of “convenience”.

If you are an admirer of movie poster and cover art, then there’s no other format out there better than LaserDisc.  Again, much like music LPs, LaserDiscs are 12″ in diameter, which means their protective jackets are a fantastic canvas for rich and colourful movie art.  And if the LD release happens to span two discs, then there’s a chance that the publisher used a double sized “gate-fold” jacket.  You just don’t get this sort of thing with DVD or BluRay, let alone streaming video services.

One of the things I’ve always liked about watching movies on LaserDisc is that, when you load up your video disc and press play, you are watching your movie.  There’s no FBI / Anti Privacy warning screens that you are prohibited from skipping through, no annoying menu systems to navigate, and no lengthy previews you’re forced to watch.  There’s no regional lockouts that you have to worry about, either.  There’s nothing between you and your movie.

LaserDiscs sound fantastic and (I think) are far superior to even today’s most modern technologies.  There’s just no home media format that can produce sound as good as what you’ll hear on a LaserDisc.

There’s also quite a bit of content produced on LaserDisc that is still no where to be seen on other modern formats.  I’m not just talking about special movie commentary tracks or special feature content; I mean there’s entire movies and programs out there that only exist (and probably will only ever be) on LaserDisc.

In my experience, LaserDiscs are also the most robust video format ever produced.  There has to be pretty extensive damage done to a LaserDisc before it causes problems during playback.  I cannot say the same for DVDs.  I’ve had many problems trying to watch a DVD, with it’s skipping and freezing up during playback all because of a minor smudge, scratch or fingerprint on the disc.  I have bought a few LDs off of eBay over the years that do have a few scuffs and scratches on their surfaces; a couple of them are bad enough that I thought they’d have problems.  But, I can watch even these discs and not see anything abnormal appear on screen.

Although movies on VHS also have pretty reliable playback, there’s a chance of the delicate video tape getting damaged at some point during playback.  The only chance of damaging a LaserDisc is by mis-handling from it’s owner.

I’ll always preferred my movies to be on LaserDiscs, just like I prefer my music to be on vinyl.  If I can’t get a movie on LaserDisc, then VHS is my next format of choice.  But that’s another story.