Although I’m very pleased with Q4OS Linux, which has been my operating system of choice for over six years now, I happened across Exe a few weeks ago and decided to give it a try.

The first thing that grabbed my attention is that it uses, by default, the latest version of Trinity (TDE) as it’s desktop environment. You’ve might have read in previous blog posts, I really like the Trinity desktop.

The second thing that got me looking closer at Exe was that it is a variant of the Devuan operating system. This wasn’t the thing that particularly grabbed my attention, as I never knew much about Devuan. But, one of the claims is that Devuan is a fast and light version of GNU/Linux because it doesn’t rely on systemd. I really didn’t pay much attention to this systemd controversy, which divides much of the Linux development community, but I decided to look into it a little bit. I don’t wish to go into all of that in this blog entry, but the results of my study of the matter made me want to give Devuan and Exe a try.

What David Hare, the developer of Exe, did was take the Devuan distribution (which is based on Debian) and stripped it down to it’s basics, then installed Trinity as the desktop environment. So, what you have is very fast and lean Debian OS running a complete and up-to-date Trinity desktop. For good measure, David also included OpenBox as an alternative DE, but I haven’t bothered to touch it.

The live ISO comes in at around the 700MB mark and includes much of the Trinity system tools and utilities, along with Amarok for playing music, Firefox ESR for a web browser, Synaptic for your package manager, GIMP for image editing, and the KDE 3.5 KOffice suite that actually works. The office suite includes KWord, KSpread, and Kexi.

When I first started up the live distro environment, which I installed onto a USB thumb drive, it was very quick to boot. I had a choice of language settings to boot up into. By default, it uses a UK language and keyboard configuration.

The Trinity desktop was up and running in very little time and everything on my Lenovo laptop was detected, aside from my wireless Internet device. More on that a little later on in the review. The desktop was nice and clean and I was pleasantly surprised to see so many of the TDE-centric apps and utilities in the Applications Menu. 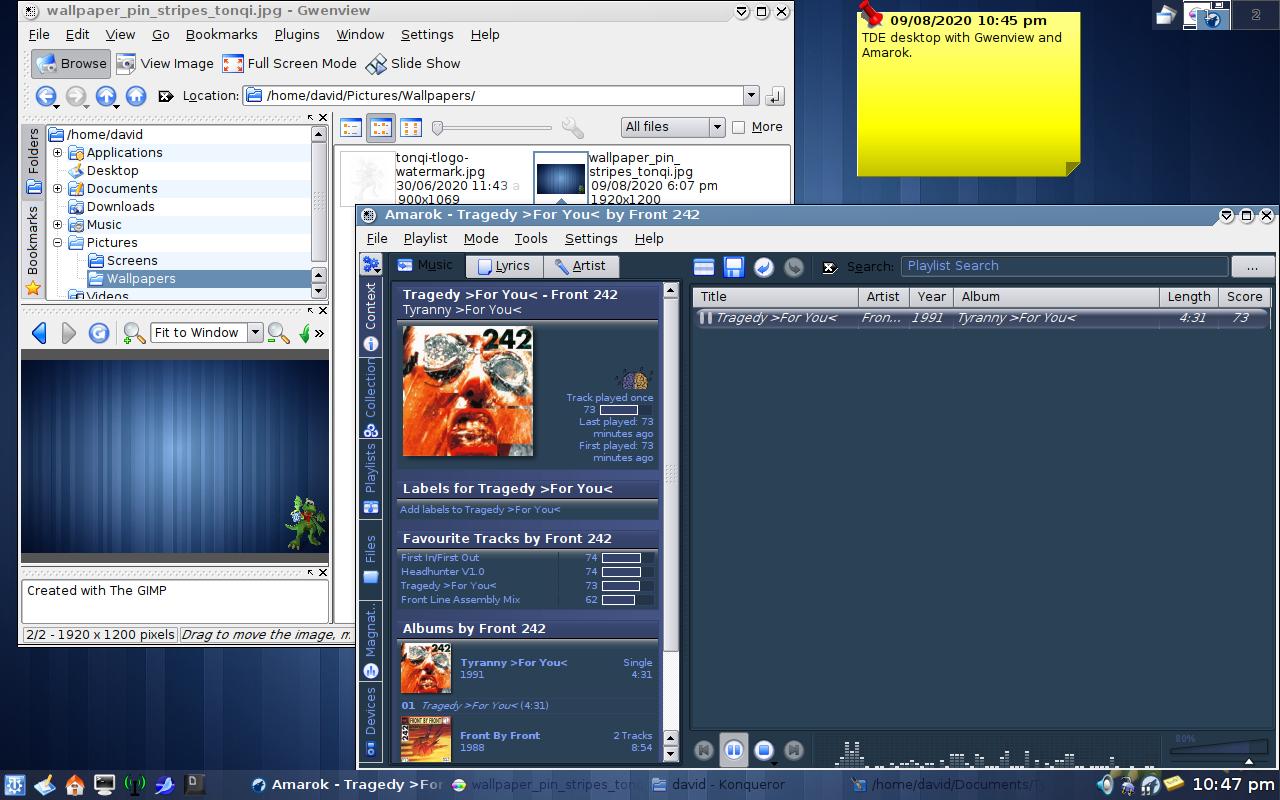 I was a little put off that my wi-fi didn’t run “out of the box”, but I did a bit of reading on this matter. Exe and Devuan is trying to stick to the principles of providing only free software, which makes it difficult for them to provide support for devices that require proprietary drivers. So, I can understand why my Lenovo’s wi-fi was not working. But, there’s instructions on the Exe webpage on how to go about getting those drivers installed and working.

The process wasn’t too difficult and it just took me a few minutes at the command line to get it all sorted out. It’s just a bit of pain for me because I don’t have a way to connect to the Internet via a wired connection. I must use wi-fi for the Internet. I just downloaded the .deb packages that I needed using Q4OS, then dpkg’d them onto my Exe install.

Speaking of installing Exe, the “Live Session Installer” app that is provided worked like a charm. It was dead easy to install Exe along side my Q4OS install, once I created a partition for it on the hard drive. GRUB installed itself perfectly, keeping Q4OS as a bootable option. Because the distro is so compact, it took less than five minutes to finish the job. After installing Exe, the entire system takes up less than 3GB of space on my hard drive.

I’ve perused the Devuan repositories a little bit and it looks like there’s a plethora of softwares available for the system. If you really want one of those bloated and overdone desktop environments for your nice, light and responsive Exe system, then they’re available. But I don’t know why you’d gum up the works with one of them in the first place. 😉

I really have only one “complaint” about Exe, if you can really call it a complaint. What really made me apprehensive of giving Exe a try was the very spartan Exe website. There’s really not much there, in the way of documentation or support from the developer. Also, there’s no real channel for community support there, either. I’ve posted on the Exe SourceForge discussion board, but it doesn’t look like anyone visits nor contributes to it.

To me, Exe is a project that deserves more attention. I tend to think that, if there was more of an open line of communication for it’s users, perhaps more people would be encouraged to pay more attention to it.

In any case, I really like what I’m seeing and experiencing with ExeGNU/Linux. I’ll certainly be spending more time with it in the coming weeks and months.  If one of the reasons why the OS is so snappy is because it doesn’t use systemd, then I can see why some developers are so determined not to use it.

Using it has even encouraged me to spend more time working with the KOffice suite once again! With every other distribution (after KDE went Plasma), the KOffice suite was an unstable/unusable mess for me. But, here I am, writing this review in KWord and it hasn’t crashed on me once! This is remarkable to me. I even converted a spreadsheet of my video collection, which I built in LibreOffice, to KSpread without a single issue. If this keeps up, I may not even have to install LibreOffice… but I’ll save my final judgement on that for now. 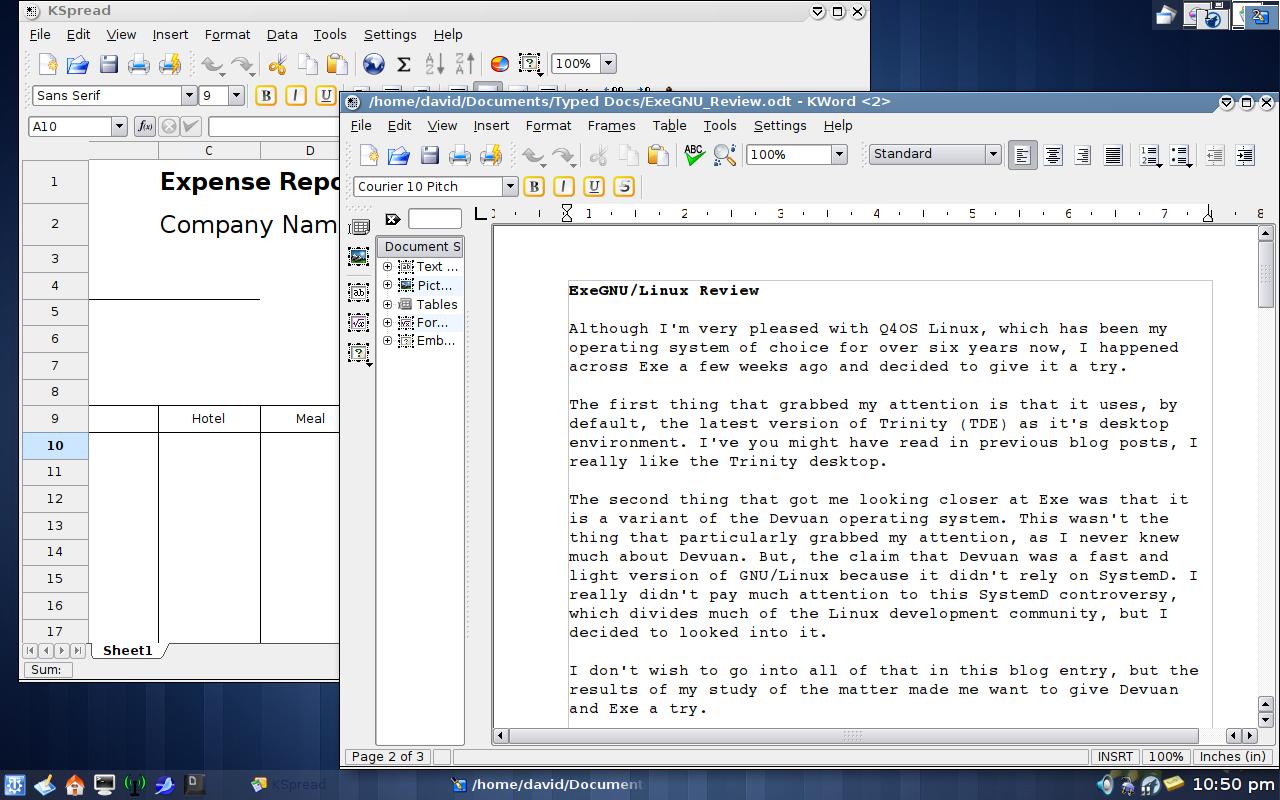 You can check out ExeGNU/Linux yourself by visiting the project’s webage, here: http://exegnulinux.net

Today I happened across the Official Devuan Forum, which looks like it’s very active with lots of helpful people.  It even has a thread for ExeGNULinux, which was a great relief for me to find.