I wrote a little bit about our collection of all-in-one turntable consoles, here.  So now, let’s take a look at the handful of portable record players we’ve been able to collect over the last few years.

Up until my mid teens, the portable turntable is what I had to listen to music, apart from a transistor radio.  The one I remember the most from my youth was a beige and white suitcase style RCA record player.  It wasn’t anything fancy, it had a single mono front speaker, a manual toner arm, and played three speeds.  It wasn’t until I started high-school did I upgrade to an actual turntable and receiver/amplifier combo.

So, portable record players are something I’m very familiar with and kind of know what to expect from their performance.  About the only thing I don’t miss about today’s units (when compared to the ones from my youth) is having to stack pennies on the toner arm to keep the needle from skipping all over the place. 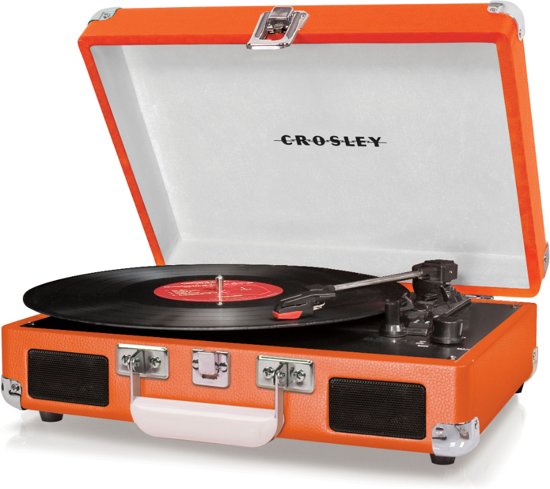 The first “modern” portable player we purchased was one of the early Crosley “Cruisers”, which we bought not too long after purchasing our Emerson all-in-one, back in 2005.  I don’t have it on hand at the moment to photograph it.  It’s put away in storage due to the fact that we can’t use it anymore.

It’s silly, really, as to the reason why it’s unusable; these early models were battery powered only.  You had to charge the built-in battery via the USB port.  This is fine and all, until the battery could no longer hold a charge, which is what happened to ours.  Even with the USB port plugged in and getting power, the battery would not charge and, therefore, the turntable would not power up.  Who ever came up with that design wasn’t really thinking.

Although this is the major design flaw of the unit, it wasn’t the only issue we had with it.  First of all, the case itself is too small for a 12″ LP.  Therefore, when playing an LP, you can’t close the lid.  This might not sound like a big issue, but one of the reasons we bought a portable player was to take outside.  With lid open like that, there’s potential for something unexpected, like a wind gust, to force the lid to come clamping down on the LP being played at the time.  And the build quality wasn’t really all that good.  Not too long after buying our Cruiser, the glue on the corners started to loosen and the faux leather covering started to lift.  Not very good.

In regards to all of the “modern” turntables we own, portable or otherwise, this version of the Cruiser is the worst sounding of the bunch.  There’s very little bass produced by the tiny built-in speakers and, overall, the playback sounds very “tinny”.

Our second portable turntable we purchased just a couple years ago.  It was the Electrohome Archer EANOS300 turntable. It is a drastic improvement over the Cruiser, with a much better designed case and no battery pack to wear out.  Of course, having to plug it in to a power source kind of limits the portability of it, but I’d much rather have to plug it into an extension chord, than have a useless battery pack to deal with.

The case is very sturdy, with quality hinges and lid support, and a very nice supple finish.  The felt interior is a really nice touch and brings a feeling of distinction.  Most importantly, it’s capable of housing a 12″ LP!  It’s great being able to close the lid to help protect the record being played.  The player also has an auto-return tonearm, which is a nice touch and improvement over just an auto shutoff, like other players.  Of all of the portable players I’ve seen, the Archer is the classiest, in my opinion.

Along with being able to play records, it can also play music from a USB device or via it’s Aux-in jack on the back.

The sound is actually not too bad, from the small built-in speakers.  It’s much better than our Cruiser; still lacking on the bass a little bit, but certainly acceptable for a portable turntable.  And, when you plug in a set of good headphones, you get a real rich sound.  We like our Archer very much.

The sad thing is, for what ever reason,  Electrohome has discontinued production of the Archer and I see no signs of a replacement being offered.  And that such a shame, as they are one of the nicest portable turntables I’ve seen on the market.  They’re even getting to be a rare thing to find on eBay these days.

The third portable record player we have was kind of an unexpected purchase.  We found this Crosley Revolution CR6020A on sale at Forest City Surplus.  It’s an early version of the Revolution, which is probably why it was on-sale at the time.  We thought it was an interesting design and, for the price, we couldn’t pass it up.  We’re glad we took a chance on it, because it turns out to be a pretty good little record player.

There seems to be at least two different models of the Revolution; ours doesn’t have the FM transmitter (to play the output on a near-by radio), nor does it have the built-in speaker.  What it does have, however, is ear-phone and auxiliary out jacks, USB power/data for connecting to a PC, and included earbuds (in their own storage compartment).

One of the most useful features that this little record player has is the ability to run off of four AA batteries, if you don’t have USB power handy.  I think this is great, as I really don’t like these modern day devices that run off of their own specially designed battery packs.  No matter what kind of rechargeable device I’ve owned, the battery packs have always failed to hold a charge at some point.  It’s really frustrating, so running off of standard alkaline batteries is a real treat!

Even though this model doesn’t have internal speakers, I still really like the sound quality I get out of this record player.  I just plug in my hi-fidelity Sony head phones into this and I get some really nice, rich sound to enjoy.  Let’s face it, any kind of speaker put into a device like this isn’t going to sound all that great.  So, plugging in my own is the best way to hear anything decent out of it.

I suppose the one factor that helps make this record player sound as good as it does is it’s diamond tip cartridge.  Usually I have to upgrade these turntables myself to get a diamond tip needle on these things, but this time it came with it.  Also, I’m quite surprised at how well the tonearm is balanced.  Again, it’s a portable record player, so you can’t expect too much from it, but it’s surprising it’s as good as it is.

Lastly, I think the player itself feels like a solid build.  It doesn’t feel like cheap, flimsy plastic. It feels heavy enough and has a nice rubbery finish on it, which adds to the build quality.  It even comes with a little rubber pad for the platter and a built-in handle on the back, so it’s easy to carry around – perhaps to your next pic-nick or outdoor barbecue.

All in all, the Crosley Revolution is a vast improvement over the Cruiser.

Anyway, that’s my collection of portable record players.  Hope you enjoyed the review.  If anything , I hope it shows you that you don’t have to spend a lot on a bunch of expensive equipment to enjoy listening to music on good ol’ fashioned vinyl records.

And, you know, there are many “audiophiles” out there that will tell you that you will damage your LPs if you play them on these inexpensive all-in-ones and portable turntables.  But, to tell you the truth, just be gentle and take care of your LPs and maybe upgrade the needles to diamond or sapphire tip, you’ll be just fine.  We’ve been enjoying these turntables regularly for over sixteen years now and our LPs are still playing and sounding great.

Just for the record (no pun intended), we do have a higher end turntable, which you would plug in to a sound processor/receiver, we just don’t use it anymore.  It’s packed away as we get just as much listening enjoyment out of our all-in-ones and portable players.